For some flyers, much of the flight is perceived to be relatively routine and does not evoke any negative emotions or feelings. That is, until we get to the landing… The grand finale of every flight, the landing is often the phase of flight that really causes some individuals to be on edge. Worse yet, is when the flight is passing through or near some form of weather, which has the potential to compound or intensify those feelings. Being able to look out the window can sometimes provide some level of comfort or consolation during the approach and landing. But what if that view is diminished or completely blocked by rain, snow, etc.? Many passengers begin to feel uneasy and question if this is safe? How do the pilots find the runway and land safely when there is weather or a storm?

Anyone who has flown to San Francisco knows about delays due to fog.  The same goes for people flying through cities like Chicago in the winter time when it comes to snow.  Likewise, for places like Atlanta in the summer with thunderstorms. First there’s the waiting or holding, then comes the eventual experience of landing in these conditions. It can be pretty unnerving for some flyers.

From a passenger standpoint, most of these scenarios tend to look relatively similar. The plane is steadily approaching the airport. As you look out the window(s), you can no longer see much outside because visibility is obscured by rain, snow, clouds, etc. For all practical purposes, it’s as if mother nature has pulled the window shade closed from the outside, because you can’t see a darn thing out the window. Meanwhile, the plain is tilting, rocking, and gyrating in different directions for what seems like forever. Then, suddenly, about ten to fifteen seconds before the plane touches down on the runway, you are finally able to see outside.  At this point the plane is only a few hundred feet above the ground!  How in the world do the pilots know where the runway is??? Contrast this with the idea that it’s fairly easy to understand how pilots land planes in good weather, but how do they do it when conditions are less favorable?  The short answer is: instruments (and no, we are not talking about guitars and trumpets).

…when visibility is reduced due to clouds, rain, snow, or fog, the pilots must shift their primary focus to their flight instruments in order to locate the runway and land.

Most of the time, when the weather’s relatively good, pilots land airplanes by primarily using visual references.  Basically, they look outside, see the airport/runway, and rely on experience and training, maneuvering the plane by hand all the way down to the runway.  However, when visibility is reduced due to clouds, rain, snow, or fog, the pilots must shift their primary focus to their flight instruments in order to locate the runway and land.  These flight instruments show various factors like airspeed, pitch, altitude, etc. Additionally, there are also navigation instruments that depict the aircraft’s location, by utilizing signals received from either ground or satellite based navigational aids.

So how exactly, do the pilots use these instruments and navigation systems to figure out where that two-mile long piece of concrete called a runway is located?  Well, there are lots of tools at the pilots disposal (and we won’t try to discuss them all here). The most accurate and common navigation system for landing is known as the Instrument Landing System or ILS. These systems are essentially comprised of two radio transmitters located along-side the runway that emit signals, which can then be received and tracked by all airliners.

One of the transmitters emits an invisible beam that extends along the center of the runway for many miles along the approach path.  This signal provides horizontal guidance all the way up to and beyond the end of the runway.  At the same time, a separate transmitter emits a beam along the runway path up into the sky at approximately a 3 degree angle relative to the ground.  This creates a virtual descent path for airplanes to use for vertical guidance.  Both of these signals are received by the airplanes navigational systems and displayed on cockpit instruments.  When combined, the two signals create an artificial pathway that extends out from the approach-end of the runway up in to the sky for many miles.  Think of it like an invisible spotlight, shining up in the sky at a shallow angle, that can seamlessly pass through clouds, precipitation, and all kinds of weather, that can be easily identified by all pilots and planes.

These systems are highly accurate and incredibly reliable, enabling the plane to land in near zero visibility!

The pilots then use their flight instruments to follow these two horizontal and vertical paths down the center-line of the runway for a safe landing.  These systems are highly accurate and incredibly reliable, enabling the plane to land in near zero visibility! Additionally, there is even a set of what are known as approach lights that are incorporated into and extend out from, the runway itself. This compilation of various colored lights and patters are specifically designed and oriented to aid the pilots in visually identifying the location of the runway to better orient the plane’s path for landing.

It should be noted that every airliner has three sets of flight instruments for navigation.  There is one set for the captain, one for the first officer (co-pilot), and one back-up.  Each pilot also has their own set of controls in the cockpit so that either pilot can land the plane.  These tools enable pilots and their planes to safely fly right down to the end of the runway and land every time (even with bad weather or reduced visibility). While these types of weather conditions may not make for a very comfortable experience (or the best view) from a passenger’s perspective, as an airline pilot I can tell you that these navigation systems are in fact, incredibly safe and reliable. The ILS is a tried and tested tool that has been in use at airports across the globe for over half a century. You can rest easy knowing that even if you can’t see outside, the pilots are always able to tell exactly where the runway is located throughout the approach to landing. 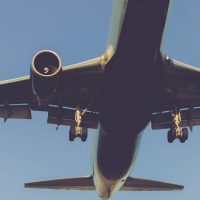 How Does the Plane Stop So Quickly? 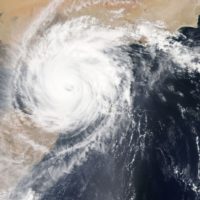