Long flights over water can be a source of concern for some fliers who are accustomed to looking out the window and seeing solid ground and a suitable place to land (should the need arise). Ocean crossings to Europe, Asia, and other regions typically involve a flight path that will take the plane over water for an extended period of time. For passengers with any kind of fear of flying, this scenario can seem rather scary since there doesn’t appear to be any place to safely land.

For most of us, we associate flying over land in an airplane with the ability to pull over to the side of the road in a car. This is an understandable correlation to make, but it is important to recognize that commercial airliners are very different from your automobile. Unlike your car on a long road-trip, all planes operating on trans-oceanic flights are equipped with multiple backups for every single aircraft system. Additionally, the pilots have a multitude of associated procedures to ensure that the plane will always be able to make it safely back over land and to an airport, regardless of the circumstance.  Imagine if your car was designed and built with the same back-ups as a commercial airliner. Such a vehicle would likely have at least two engines, three gas tanks, eight tires, three radios, four cell phones, two GPS’s, etc. In a car like that, it would almost be impossible NOT to make it safely to your destination safely every single time.

…all planes operating on trans-oceanic flights are equipped with multiple backups for every single aircraft system.

On top of all that, over-water flights are subject to even more restrictive regulations and safety standards, including legal requirements to have an abundance of extra fuel on-board for any possible scenario. These planes are never accepted by the pilots or approved for use by mechanics unless all primary and backup systems are tested, inspected, and working normally before each and every over-water flight.

For example, the airplane’s engines frequently undergo thorough inspections and are constantly monitored to an even greater extent for aircraft slated for over-water flights. Already considered to be one of the most reliable types of motors, airplane engines are specially certified for over-water operations to ensure that they have a near ZERO chance of ever failing! But let’s say, just for arguments sake, that the airplane does suffer an engine failure (an extremely rare occurrence).  In actuality, every airplane that is certified to fly over-water could easily make the entire journey with just one engine operating. It should be stressed that airlines would never operate a flight with one engine on purpose, and that procedures require any plane that experiences an engine failure to land as soon as possible at the nearest airport.

So what happens then, if there really was a need to divert to another airport while flying over the Atlantic Ocean? Where would the plane land? Let’s say that there is a medical emergency on board. In this hypothetical example, an elderly man is experiencing what appears to be a heart attack. The pilots (who are always in radio communication with Air Traffic Controllers, the airline, and a host of special services), can contact specially trained and certified doctors back on the ground who can determine if the man needs to be rushed to a hospital or what kind of treatment should be attempted.

As a precaution, the pilots are required to constantly monitor the flight’s progress and know at all times, exactly where their primary alternate airport is located and how to navigate to it as quickly as possible.  This means that should the need arise, the pilots can instantly change course for the closest landing facility that will have everything that the flight could possibly need (good weather, long runways, comprehensive medical facilities, etc.). There will never be a time when the flight does not have a viable place to divert and land in relatively short order.

There will never be a time when the flight does not have a viable place to divert and land in relatively short order.

As a commercial pilot who has flown Internationally over-water for many years, I can assure you that pilots and the airlines have a comprehensive set of contingency plans that provide a safe alternative and solution for any potential situation while flying over water. These procedures are based on almost one hundred years of experience flying over the oceans. So, while an ocean crossing may still make some flyers nervous, they can take comfort in knowing that the reliability and redundancy of the aircraft and its systems, combined with comprehensive safety procedures, will ensure that their flight over-water will ALWAYS be completely safe. 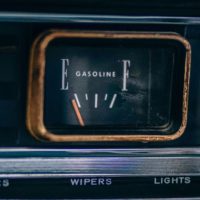 Are We Going to Run Out of Gas?!